Adapting Graphic Facilitation when you really need to

You are here:
Graphic Facilitation 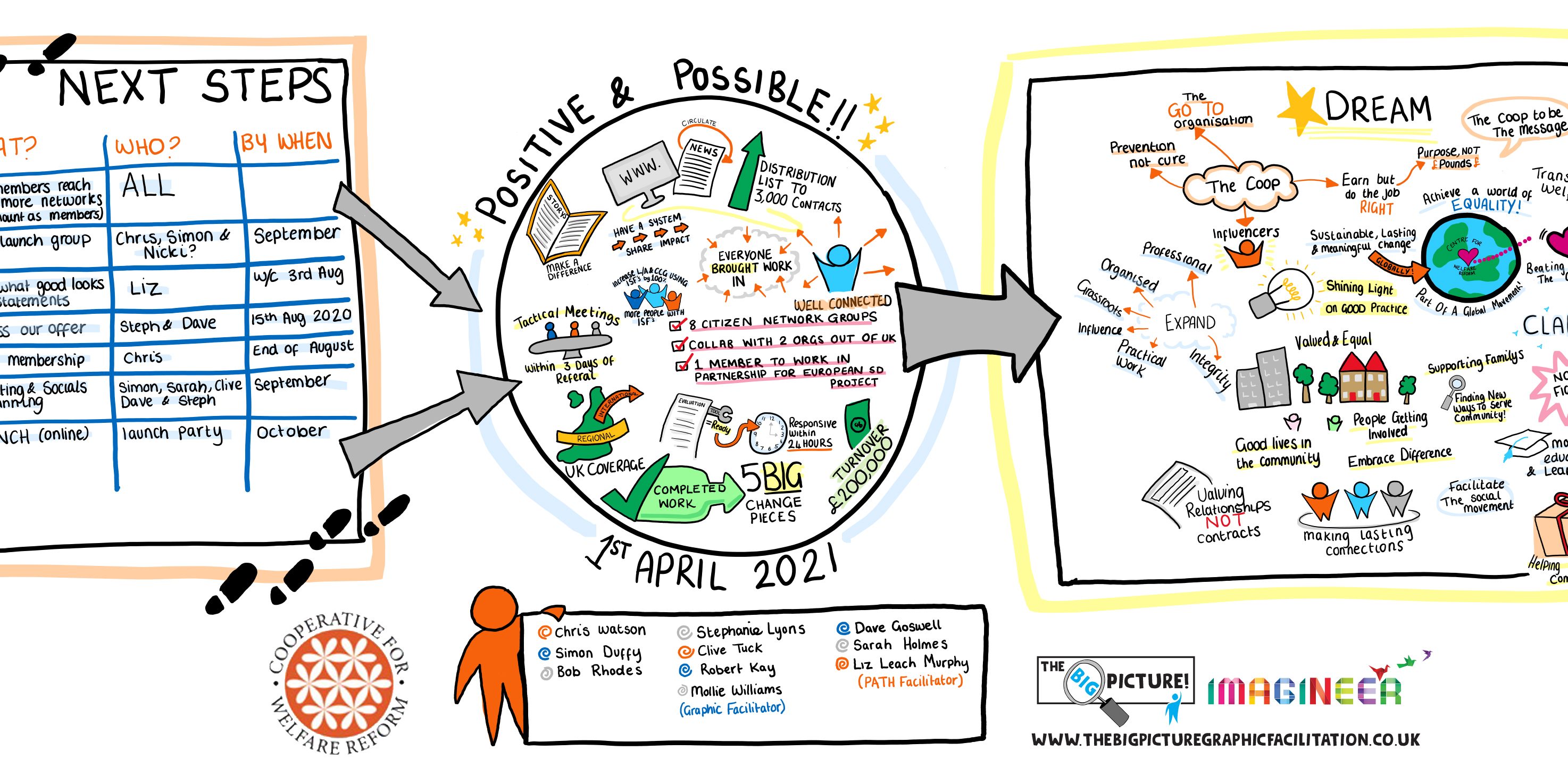 Many people have probably already tried Graphic Facilitation through online means, but for me this whole experience has been a first.

I prefer being in the same room as the people that I’m Graphic Facilitating for.  I can see all their initial reactions straight away, their love for it, their suggestions for the graphic we’re creating together and even the bits that they think could have been better.

How I First Graphic Facilitated Online at the Start of Lockdown

So, this new online life we have all had to adapt to has been quite difficult for me. At the beginning of the lockdown, what feels like many moons ago, I would be on video call to the group that I was Graphic Facilitating for but I would be graphicing on paper in my own bedroom/trying to be office, showing them as and when they wanted to have a gander. I would then take pictures, clean them up in Photoshop and send it to the group afterwards through email.

I did not really think that this way was any good. People could not react to the image. They did not know that the blob on the page was supposed to be a guinea pig, all they could see was a weird blob and an arrow stating what it is… There was also not the usual laughing or joking at the image when it looked a bit strange.

The next adaptation to get used to was to have a camera facing me as well as a camera facing the paper that I was drawing on (making sure it was not upside down or back to front on screen).

That way at least the people on the call could see my drawings and could make suggestions or comments on it.

After I had done Graphic Facilitating that way, I would again take pictures of the images take them into Photoshop, give them a little bit of a clean-up and then send them over to the group.

Computer Programmes I have Used for Graphic Facilitation

I have been having a little bit of a dabble on computer programmes for Graphic Facilitation. So far, I have used Microsoft Whiteboard, this came with my touch screen laptop (Lenovo Yoga). This software comes free to use and you can save your pictures as PNGs and files compatible with Illustrator and Photoshop.

This laptop does not come with a stylus, but you are able to buy them compatible with the Yoga as well as many other touch screen devices.

The images are clean and clear, and you can use different styles of pens. However, you can only use a limited number of different colours.

You can also use Zoom Whiteboard, although you can only access this if you are sharing the screen throughout the video call.

I am just in the middle of getting some practice in for Facilitating live through a computer app…We all know how temperamental IT can be!

Obviously, there are other apps that you will be able to use, here are some below:

Are The Meetings You Attend A Snoozefest?
3rd February 2020

Get in touch
Go to Top
The Big Picture Graphic Faciliation uses cookies to allow us to better understand how the site is used. By continuing to use this site, you consent to this policy. Click here to learn more.